Odyssey of the Mind™ is brought to you in partnership with ARM & HAMMER™ Baking Soda.

Students in Odyssey of the Mind are known for thinking outside the box. The extra-curricular activity is a creative problem-solving competition, after all. However, since it is also a team activity, members had to get extra creative this season to overcome the closed classrooms and social distancing dictates of the covid-19 pandemic.

While the teams were rewarded for their resilience and perseverance with valuable life lessons – and for one local team a third-place finish at Virtual World Finals – they are all looking forward to ditching the masks, video calls and social distancing and being able to get together again in person starting this fall.

Throughout the 2020-21 school year, Odyssey teams in Loudoun County met over Zoom, in small groups with masks, and when weather permitted – and sometimes when it didn’t – outside.

“We did all of the brainstorming, script writing, planning — and goofing around — over Zoom,” recalled Elissa Seweryniak, coach of the team from Belmont Ridge Middle School. “We also practiced spontaneous problems separately over Zoom every week as well. Starting in January, it was time to build, so we broke into small groups of one or two students to work on projects and props in garages with masks on. We had some very COLD practices in the middle of winter!” 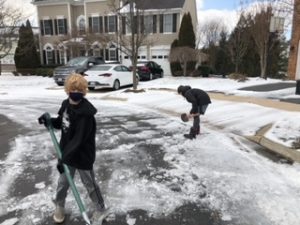 Scott Balwinski, Sereryniak’s co-coach, recalls at least one practice in which the team actually had to shovel snow off the driveway to rehearse their solution to the long-term vehicle problem.

“When we started the season and met virtually, everyone had problems with remembering to unmute themselves,” he said.

And while Jennifer Reif’s team of students from Stone Bridge High School may have been more technically savvy than the younger kids, the Zoom format still had its drawbacks.

“In previous years, some of the team’s best ideas often came about while they were hanging out and eating snacks before the ‘regular’ meeting,” Reif said. “Over Zoom, they missed out on some of that casual time together and had to work harder to build the team energy.”

“We were meeting virtually, so we couldn’t keep each other on track,” team member Katie Reif added.
However, “one of the best things about the Odyssey of the Mind program is that it encourages students to be creative and resilient in the face of a challenge,” noted Sheryl Lemma, regional director for Loudoun County.
So rather than be daunted by the obstacles presented by the pandemic, Loudoun County’s teams adapted and excelled, taking video solutions to their problems to competition at the Virginia States tournament and then to Virtual World Finals.

Steuart Weller’s Cossa praised his team’s perseverance through the season. As a team new to the Odyssey of the Mind program, he said the biggest challenge was recruiting and retaining members.

“When we started, we weren’t sure we’d have enough members to form a team, and we weren’t sure how the season would work virtually,” he said. “We originally started with six team members, and were down to four by mid-season. One team member had to leave the team once we were well into the long-term problem. This meant that the remaining four team members had to take on additional roles and characters. They all adapted and stepped up to the challenge. Everyone gave it their all through the season no matter what challenge was thrown our way.”
Reif said her Stone Bridge team’s long-term performance changed in response to the pandemic restrictions. “Instead of a large, complex set and intricate costumes, they embraced the Zoom meeting format and created a small scale set and puppets,” she explained. “Each team member was a comic book character in their own box on the screen.”

Bob Ellsworth’s Riverside High School performance problem team has been competing together for more than six years, and was able to capitalize on their previous experience as a Worlds Finalist team. “Because we have been doing this for so long, we have a huge number of tools and materials here and we recycle 100% of our props from previous years,” he said. “The inability for team members to work on larger props together was a major challenge. We had to scale back what we usually do and relied on props we had built before but never used in some cases.”
Seweryniak said having her Belmont Ridge team meet over Zoom “required a lot more planning about who was working on what; clarity on what the team was expecting to happen in the skit with the props; and trust that individual team members could take an idea and run with it in any way they thought best.”

“After three years of being together, the kids had fallen into a routine for how they liked to do Odyssey. Certain kids loved building sets and working with tools; others liked the detail decorating work; and others worked on the script. In normal times, they would get together as one group and real-time collaborate and have a blast hanging out together,” she added. “COVID changed all of that — in some ways, for the better.”

“Kids who previously worked with tools had to do a different project because the art supplies were at their house; it reshuffled what they worked on and helped them build new skills,” she explained. “They also had to divide and conquer, and each team member was in charge of different parts of the skit to plan and build. They also became very good at communicating via Zoom and other technology.”

Finding the positives in adversity paid off for the Belmont Ridge team – they won third place in the middle school division of Problem 1 in this year’s Virtual World Finals.

Even with their success on the Virtual stage, the Belmont Ridge team is looking forward to getting back to normal for this coming school year. “The last two years have been bittersweet because even though they did very well, it just isn’t the same experience to not to travel out of state, see others from around the world, and, of course, pin trade,” Seweryniak said of World Finals and referring to many teams’ favorite pastime at the international event.
Ellsworth said his Riverside High School team is anticipating this coming season as well. “Our goal is to get to Worlds — in person — to do pin trading!”

Of the season overall, Ellsworth added, “We realized we need to do this together. OotM is not an individual effort, but a team effort.”

Stone Bridge’s Reif summed it up by saying, “I think the team gained a new appreciation for how much they enjoy their time together in person. While virtual meetings are great in a pinch, there is no substitute for sharing snacks and improv lines with your friends in person.”

The Regional Directors for Loudoun County are already hard at work planning the coming season for Odyssey of the Mind. Dates are set for in-person tournaments in the spring and information will be published soon on the regions’ website about upcoming interest meetings for new and established teams.

“We are so proud of our students for their creativity, commitment and resilience on so many levels over the past year, and especially proud of the teams that found creative ways to come together to participate in an Odyssey of the Mind tournament,” said Lemma. “It was an outstanding achievement to bring any solution to a competition this year, and we are delighted at how successful those solutions were! We are looking forward to this upcoming season, and seeing those solutions in person next spring!”